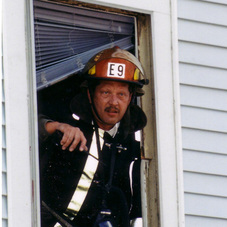 My father, Keith Dierolf, was a firefighter with the Scranton Fire Department. After nearly 29 years of service he retired as a Lieutenant in 2002. He used this time to enjoy his family, especially his new granddaughter. He spent time with friends and working with organizations such as The Black Sheep. The Black Sheep is an organization that raises money to help sick children. He would be so happy to come home and tell me that they had presented a check to a deserving child. I wish you could have seen the light in his eyes when he knew The Black Sheep had helped another young boy or girl.

In early 2006, at only 54 years of age, he was diagnosed with Stage 4 esophageal cancer. It had already spread to his liver and lungs. He began chemo immediately. One of the drugs that was recommended was Avastin. Unfortunately, this drug was not covered under his health insurance for this type of illness. He continued alternative chemotherapy drugs while trying to get Avastin approved for his treatment. Later that year The Scranton Fire Department and The Black Sheep organized a benefit for my dad to help with his medical expenses. The response was amazing. It was at this benefit that I learned of Foundation 58. That evening they presented my father with their first ever grant as part of the Gabriel A. Mhley grant program. My father, and our entire family, were deeply touched and grateful for their support.

Eventually, Avastin was approved for my father’s treatment. He continued to fight the disease but as you can imagine cancer takes a tremendous toll on you physically, emotionally and financially. Organizations, such as Foundation 58, help to make that burden a little easier. I am so grateful that they were there to help us out and lend a helping hand when we needed it most.

Sadly, on March 3, 2009, my dad lost his battle with cancer. Not a day goes by when I don’t think of him and of the people that stood by us during his long struggle with cancer. Foundation 58 will always hold a special place in my heart for their dedication to helping others. It is my hope that they continue to succeed in making a difference.